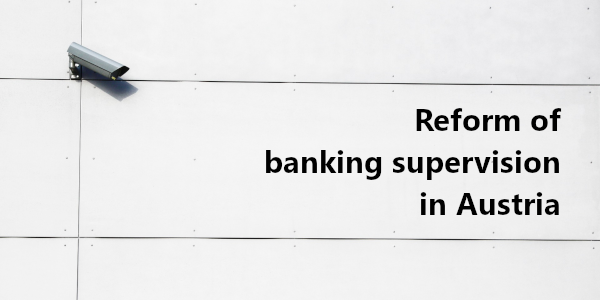 On 15 April 2019, the Austrian Minister of Finance published a draft law amending the strucutre of financial market supervision. You can find the legislative package HERE. It is open for consultation until 6 May 2019.

This step was already expected and follows a prior governmental announcemnet from November 2018 to reform the national banking supervisory system. You can find the announcement HERE (in German only).

This client briefing summarises the envisaged amendments to the Austrian banking supervisory system.

Currently, the Austrian banking supervisory system is a dual one. Supervision of banks operating in Austria, and not directly overseen by the ECB’s Single Supervisory Mechanism (SSM), is shared between the Financial Market Authority (FMA), Austria’s independent, integrated financial supervisory authority, and the OeNB, Austria’s central bank.

While the OeNB is in charge of on-site inspections and off-site analysis, the FMA interprets and oversees compliance with banking regulations. The FMA is also responsible for conducting official measures, such as imposing supervisory measures and administrative sanctions.

From 1 January 2020, the Austrian government will bundle all micro-prudential banking supervisory responsibilities under the roof of the FMA. The Austrian Minister of Finance, Mr Loeger, said he wants to make sure that there will be no duplications and overlaps in supervising banks. The implementation of all organisational changes shall be finalised until the end of 2019.

With the reform, the OeNB’s current competencies in relation to micro-prudential banking supervision, in particular the conduct of on-site audits and individual bank off-site analysis, are transferred to the FMA.The same shift of competencies is envisaged with regard to the supervision of the collective protection of investors, savers and insured persons and the law on recovery and resolution of credit institutions.

As a consequence of concentrating prudential supervisory tasks in the FMA, around 170 staff currently conducting inspections and individual bank analysis at the OeNB will be switched to the FMA. Based on Austrian labour law, servants are either transferred by way of a secondment or assumption.

Aims of the reform

According to its explanatory memorandum, the FMA reform aims to make the national system of financial market supervision more efficient, to accelerate and simplify decision-making processes, to establish clear contacts for market participants and EU institutions and to increase service orientation. It is intended to remove the current split of competencies between the FMA and OeNB and to concentrate the entire micro-prudential supervision of the financial market in the FMA.

Changes to the FMA's governance structure

The reform brings a number of changes to the FMA’s current governance structure:

Separation of supervision and regulation

In the future, also regulatory and supervisory tasks shall be better separated. While the FMA shall concentrate its efforts on supervising banks, its regulatory tasks shall be mainly tasks of the Ministry of Finance. For this purpose, three new departments with 30 new staff will be established in the financial market division of the MoF. The draft law also strengthens the MoF’s supervision of FMA.

While the OeNB shall lose its banking supervisory responsibilities, competencies to oversee financial market stability shall remain with the central bank.

In order to fulfil these macro-prudential tasks, the OeNB shall be entitled to require the FMA to carry out respective inspections for reasons of financial market stability, for macroeconomic reasons or in a crisis situation. The OeNB must state the reasons for the audit and stipulate the envisaged scope of the audit. The FMA may either comply with the audit instruction or refuse it and state the reasons for a refusal. The FMA may only refuse conducting an audit if it would compromise the audits included in the FMA’s audit programme, other FMA audits, if the data requested in the audit instruction are already accessible to the OeNB or can immediately be made accessible. If the OeNB considers that there is an imminent risk, the FMA may not refuse the audit instruction and must comply with it immediately.

According to the government’s plans, the OeNB’s competencies in the fields of statistic, supervisory reporting and oversight of payment systems remains unchanged.

Soon after the end of the consultation period (6 May 2019), the government will send its final draft law to the Austrian Parliament. We expect that the reform will be formally adopted by summer 2019. It shall take effect as of 1 January 2020. We will provide a respective update once new information is available.